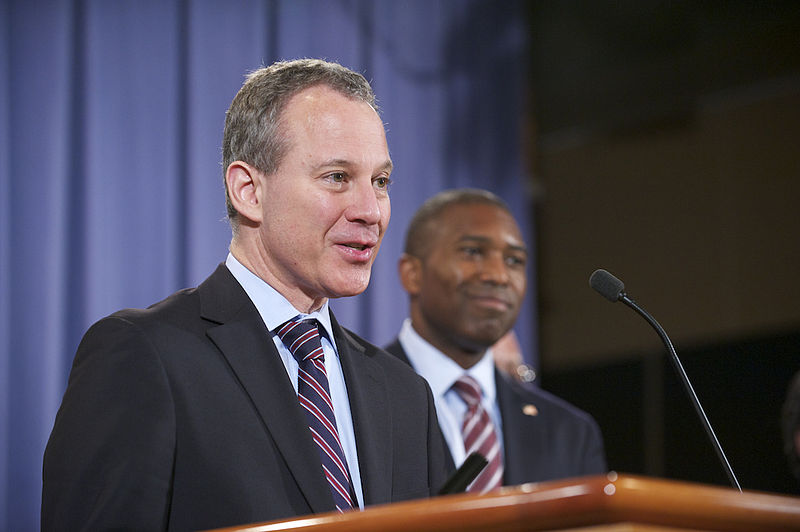 After a stunning exposé published by the New Yorker, New York Attorney General Eric Schneiderman has resigned. Schneiderman, a 63-year-old Democrat who was expected to seek his third term as Attorney General in this year’s elections, was accused of physical abuse by four women with whom he had had relationships. The women claimed that he hit them, often after drinking and while in bed with them, and always without their consent. The violence included slapping, choking, and death threats.

Schneiderman had begun to make a name for himself recently in the wake of the allegations against disgraced movie mogul Harvey Weinsten and the rise of the #MeToo movement. His office began to take a prominent role both in filing a lawsuit against Weinstein and in looking into why previous investigations into Weinstein’s behavior by the Manhattan District Attorney and New York Police Department went nowhere. He had positioned himself as a prominent defender of feminism and women’s rights. But that all came unraveled with the publication of these recent allegations.

Schneiderman’s former girlfriends all allege a pattern of both emotional and physical abuse that occurred throughout their relationships. Schneiderman both abused them physically, especially during sexual encounters, and psychologically, belittling them, berating them, and attempting to control them. They also allege that he was a heavy drinker, often drinking two bottles of wine a night, along with liquor, and frequently combining that with sedatives such as Xanax.

Two of the accusers who have come forth publicly are former girlfriends of Schneiderman, with one former girlfriend and one prominent lawyer whom Schneiderman made a pass at and assaulted choosing to remain anonymous. Given the threats allegedly made by Schneiderman and his view that he, as the Attorney General, was the law, there is undoubtedly much to fear. It doesn’t help that Schneiderman’s victims had previously been counseled by friends within Democratic and progressive political circles not to report Schneiderman’s antics since he was deemed too important to the Democratic Party to expose as an abuser.

It’s sad, unfortunate, but not entirely surprising that Schneiderman would have engaged in such behavior. As Lord Acton stated, “Power tends to corrupt and absolute power corrupts absolutely.” Schneiderman follows in the footsteps of former New York Attorney General Eliot Spitzer, who as governor was ensnared in a prostitution scandal and forced to resign. Hypocrisy exists at all levels of government, but it seems especially acute at the top. In the wake of the resignation of Minnesota Senator Al Franken following sexual misconduct allegations and now the resignation of Attorney General Schneiderman, the question is who is next?