REDTEA NEWS
Tank Gift to Ukraine Exposes the Sad Reality...
The Government Thinks We’re the Terrorists Now
FBI Admits It Uses CIA and NSA to...
Democrats Are About to Learn That Turnabout Is...
If You Like Your Gas Stove, You Can...
McCarthy’s Woes Are Payback a Long Time Coming
The Response to the Twitter Files Is Telling
Are San Francisco’s Killer Robots the Wave of...
The Genocidal Tendencies of Climate Change Crazies
The Siren Song of Being “Moderate”
Home Survival Revolvers vs. Semi-Auto Pistols: What’s Better In a Crisis?
Survival

Revolvers vs. Semi-Auto Pistols: What’s Better In a Crisis? 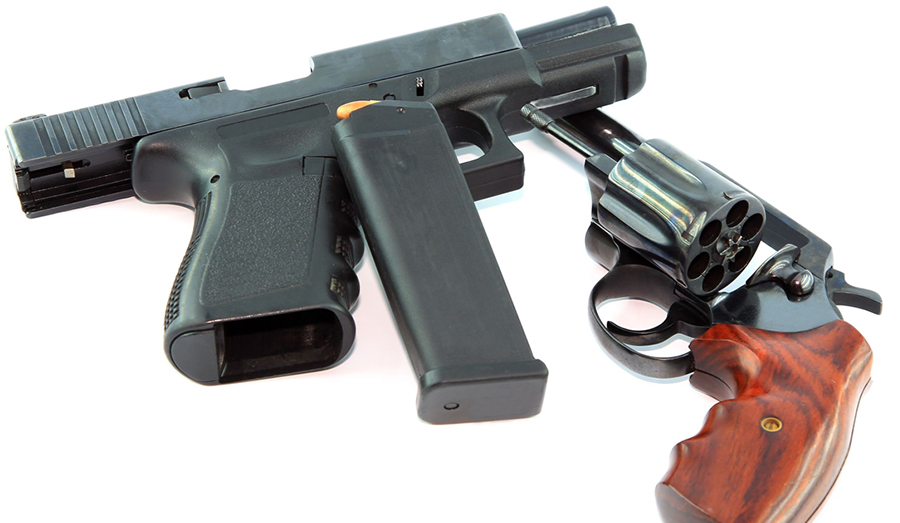 While semi-automatic pistols have dominated the handgun market for decades, there are still many gun owners who prefer the use of revolvers. Partly that’s due to tradition, but revolvers do have some advantages. Let’s go through some of the advantages and disadvantages of each type of handgun so you can decide for yourself which you prefer.

Revolvers are pretty simple to use. Insert ammunition into the cylinder, lock the cylinder into the gun, and pull the trigger. Pistols require a magazine to be inserted and the slide to be cycled by hand before a round can be chambered, which can be difficult for weaker individuals such as women and children. Many also have safeties, unlike revolvers, and if the safety is engaged a novice shooter may not realize it and fail to disengage the safety before use. In a life or death situation that could be fatal.

Again, revolvers are easy to feed. Just place your rounds in the cylinder and you’re ready to go. Pistols require magazines to feed. If you don’t have a loaded magazine ready to go, you’ll have to load it round by round. However, if you’re under stress it’s far easier to load a single magazine and be ready to go than it is to try to extract six spent shells and insert six new rounds into a revolver. Even with revolver speed loaders, revolvers can still take a while to load.

While changing magazines can be done quickly, pistols can also be prone to jams, most often with hollow point or flat point ammunition. Certain pistols may be finicky about feeding certain types of ammunition. If you encounter a jam, you need to know how to clear it, something that may not be intuitive for many beginning shooters.

Most jams with pistols can be cleared relatively easily. When revolvers jam, however, the entire gun can be put out of commission. Jams normally only occur when a revolver bullet jumps crimp, sliding out of the brass case and extending past the end of the cylinder, causing the cylinder to stop rotating and keeping the gun from firing. Depending on which chamber this occurs in, it can lock the gun up and require a time-consuming fix. While this is normally only a problem on heavy-recoiling revolvers, it can occur with any ammunition that isn’t crimped tightly enough.

The top-selling handgun cartridges are all designed for semi-auto pistols: 9mm, .45 ACP, and .40 S&W. The first revolver cartridge, .38 Special, comes in at #4, well behind the other three. That means that if you’re going to choose based on the type of ammunition you’re most likely to find, you’d be better off buying a pistol. Just make sure you have plenty of magazines too.

Pistols are also almost always going to be able to carry more rounds than a revolver. Full-size pistols can carry 17-18 rounds of 9mm, 15 rounds of .40 S&W, or 13 rounds of .45 ACP. Subtract 2 rounds for most compact pistols. Subcompacts and pocket pistols hold anywhere from 6-10 rounds. Most revolvers are going to top out at 6 rounds, although some newer revolvers will hold up to 8 rounds.

The recoil of .38 Special in a full-sized revolver isn’t too bad, but recoil from full power .357 Magnum ammunition can be quite forceful. Recoil in semi-auto pistols is often perceived to be lighter than that in revolvers. That’s because the mass of the slide and the action of the recoil spring helps dampen much of the felt recoil. It’s not uncommon for shooters to use stronger recoil springs to even further dampen the effects of recoil.