REDTEA NEWS
The Real Purpose of the Second Amendment
Why Gasoline Prices May Never Come Down
Are We in Civil War Already?
The Narrative Is So Transparent It’s Laughable
Another Pro-Life Pregnancy Center Firebombed
Attempt on Kavanaugh’s Life Shows the Danger the...
Inflation Causing Americans to Change Spending Habits
American Gun Owners Are the Last Line of...
Democrats Still Don’t Understand Guns or Gun Owners
Ask the Wrong Questions And You’ll Get the...
Home Survival Survival Firearms Battery: The AK-47
Survival 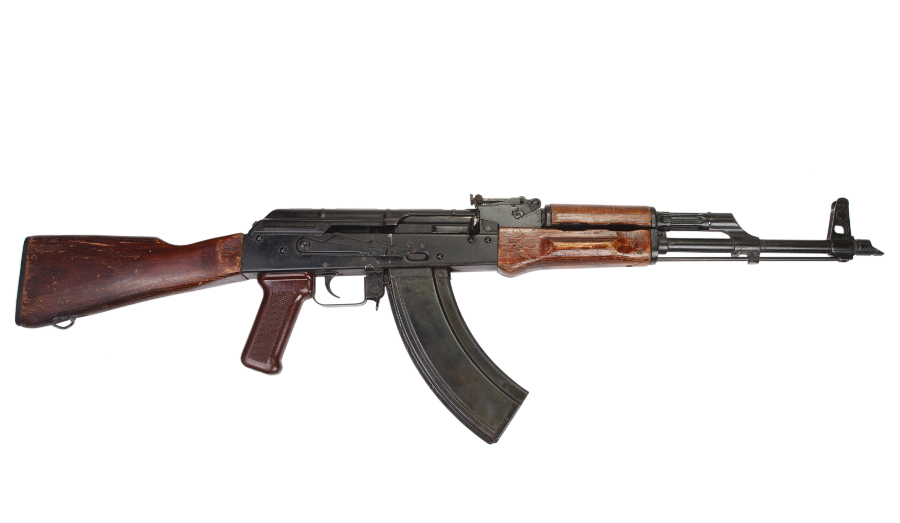 The AK-47-type rifle has been the longtime rival of the AR-15/M16 family of rifles. Developed by Mikhail Kalashnikov in the late 1940s, the AK and its derivatives were the mainstay rifle of Warsaw Pact forces throughout the Cold War. Modern developments of the AK remain in service with the Russian military and numerous militaries throughout the world, and refinements of the AK’s basic operating mechanism have formed the basis for rifles such as the Israeli Galil, the Finnish RK 62 and RK 95, the Belgian FN FNC, and the Swiss SIG 550.

The AK-47 itself was produced in three different varieties, known as Type I, Type II, and Type III. Type I is the rarest, as the sheet metal receiver it was produced with led to manufacturing difficulties. The Type II and Type III AK-47s were produced with milled steel receivers and were the ultimate refinement of the AK-47 design. In 1959 the Soviet Union began production of the AKM rifle, a modernized version produced with a stamped sheet metal receiver. All rifles through the AKM used the Soviet 7.62x39mm cartridge, which fires a .310-.311” 122-124-grain bullet at 2200-2400 feet per second.

In the aftermath of the Cold War, countries throughout Eastern Europe disposed of their stockpiles of arms in various ways. Millions of rifles found their way from Bulgaria, Romania, and East Germany to the conflict in the Balkans or to the Middle East. Once the Balkan conflict subsided in the late 1990s, and the former Warsaw Pact countries began either to join NATO or to standardize their weaponry with NATO, vast stockpiles of AKs were disposed of on the surplus market.

Many of those rifles made their way to the United States. Since those rifles were machine guns, their receivers were destroyed and the remaining parts were imported into the United States as spare parts kits. Enterprising firearms enthusiasts realized that they could create their own receivers and reassemble the parts kits into semiautomatic rifles. The expiration of the “assault weapons ban” in 2004 helped contribute to a surge both in the number of parts kits and fully assembled semiautomatic rifles coming into the country. With parts kits costing as little as $99 and Romanian semiautomatic AK rifles costing under $300, the AK quickly became very popular and remains perhaps the second-most popular rifle in the country.

Advantages of the AK

One of the major advantages of the AK vs. the AR-15 and other rifles is its reliability. With looser tolerances than the AR and a more forgiving gas system, the AK will operate under conditions that would jam an AR-15. Unlike the AR-15’s direct impingement gas system that can foul and jam if too much carbon builds up on the bolt and bolt carrier, the AK features a wide open area within its receiver for carbon and gases to dissipate. It would probably take thousands, if not tens of thousands, of rounds fired to build up enough carbon to jam an AK. The AK is also much more forgiving of dirt, sand, and other debris getting into the action of the rifle, allowing it to operate in less than ideal weather conditions that might stop an AR-15.

With tens of millions of AKs produced all around the world, and spare parts continuing to come into the US, parts are everywhere. The most popular AK rifles are those patterned on the Soviet AKM rifle, and those parts are interchangeable across a whole host of rifles. It’s not uncommon to find an AK in this country that is built from a mixture of parts from half a dozen different countries, yet the rifle still works as it should.

While steel cases aren’t reloadable, that doesn’t matter to people who just want to buy ammo cheap and stack it deep in order to stock up for survival purposes. Magazines are similarly cheap and, while the days of $2 surplus magazines are long gone, surplus Yugoslavian and new Serbian-made magazines can still be had for as little as $10.

Disadvantages of the AK

AK rifles aren’t cheap anymore. At a minimum, expect to pay $500 for a bottom-grade rifle, meaning a low-quality Romanian or US-made rifle. Bulgarian and Russian rifles are over $1000 by now, and rifles made from parts kits can command that much if they’re assembled by a builder known for top quality. Parts kits aren’t cheap anymore either, although some can be had for as little as $300. Given the cost of tooling, however, it isn’t cost effective to build an AK yourself unless you intend to build several. In general, it’s going to be cheaper for you to buy or build a quality AR-15 than an AK.

The rising cost is due to a combination of various factors. The rise of ISIS and the conflict in Syria drove up demand for AK rifles in the Middle East, so surplus rifles that would have been chopped up and sent to the US were now worth more being exported to the Middle East. European exporters also know how much their products will fetch on the US market, so prices remain elevated. And sanctions against Russia plus importation delays from ATF have slowed down the flow of spare parts and magazines and given rise to a perception that AKs and their accessories may soon be banned from importation, thus driving up demand and cost.

Because of the looser tolerances of the AK, the mass of the gas piston and bolt carrier recoiling every time a round is fired, and the method of constructing an AK from sheet metal, the AK platform just won’t be as accurate as a good AR-15. While the accuracy standards for the military’s M4 rifles is 4 MOA, many civilian AR-15s are capable of far better accuracy than that.

MOA stands for minute of angle, and is defined as one inch per hundred yards. So a rifle with 4 MOA accuracy should land its rounds within a 4” diameter circle at 100 yards, an 8” diameter circle at 200 yards, a 12” diameter circle at 300 yards, etc. Many civilian AR-15s are easily capable of 1-1.5 MOA shooting, while AKs generally are considered 3-4 MOA rifles at best. Part of the lack of accuracy, too, is the ammunition used. Cheap Russian-made steel-cased ammunition is intended as cheap fodder, not for high-quality long-range accuracy. Still, AKs are perfectly capable of hitting a man-sized target out to 300 yards.

With so much of the AK market still dependent on imports from abroad, the prospect of increasing sanctions could upend the market significantly. With most Eastern European countries having already switched over to NATO-caliber weaponry, the largest sources of parts from Eastern Europe have been exhausted. And with Russia being the largest producer of 7.62x39mm ammunition to the US and the sole supplier of 5.45x39mm ammunition, further sanctions against Russia could seriously harm US shooters. While some of that production could be taken up by various Eastern European manufacturers, the cost would be noticeably higher than the Russian-made ammunition.

Those who own Russian-made Saiga and Vepr rifles already are facing a lack of spare parts, as those rifles are based on the AK-100 series, which differs slightly from the AKM pattern. Imports of parts only occur sporadically, with long delays, and many shooters end up turning to the grey market to source spare parts. And while there are now US-made AK rifles and parts, they don’t compare in quality yet to the military surplus and European commercial parts that are still out on the market.

Despite some of the AK’s drawbacks, it remains a perfectly serviceable rifle and a good choice for someone looking to equip a survival battery. With the right choices of rifle, magazines, and ammunition, it could make a solid addition to anyone’s armory.