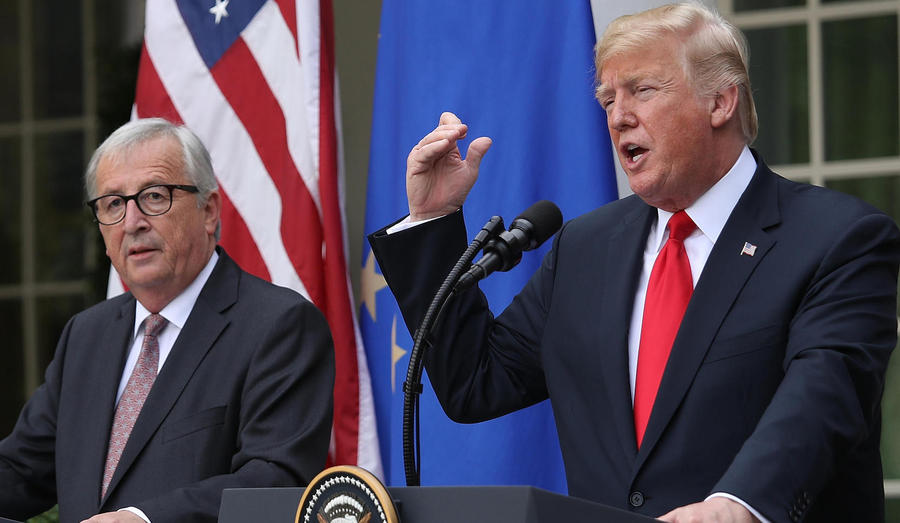 The day after President Trump announced in the Rose Garden alongside European Commission President Jean-Claude Juncker that they want to “work together towards zero tariffs,” markets reacted favorably and Trump announced predictions of between 4 and 5.3 percent for GDP growth by the end of the month. The two leaders did not stop at eliminating tariffs, though. They also promised “zero non-tariff barriers and zero subsidies for non-auto industrial goods.” Soon after, on July 27, the Commerce Department announced GDP had increased 4.1 percent in the second quarter – the best growth rate in four years.

Juncker called the meeting “a good, constructive” talk, and CNBC reported that the negotiations “would avert a trade war between the United States and Europe.” Greg Valliere, global strategist at Horizon Investments, told CNBC “this was the best outcome you could have hoped for.” CNBC also reported that “major averages rallied,” while the Dow “popped more than half a percent to a session high” along with the euro.

According to the Washington Examiner, Trump said the US and EU are looking forward to continuing their “$1 trillion bilateral trade relationship” and that the EU will be buying “a lot of soybeans” soon. A factor that helped US GDP to rise 4.1 percent was the rise in exports, as US farmers sent soybeans to China. But while the trade war between the US and China may be heating up before cooling down anytime soon due to China’s intellectual property theft practices, the revitalized relationship between the US and EU may be able to counteract it.

Conservative commentator Mark Levin praised Trump for the new upcoming deal with the EU, saying “So, this is good, if it’s true, if it turns out to be accurate is what I’m saying. If they actually can negotiate this – no tariffs and no subsidies – that’s the Levin position.” On WMAL conservative talk radio, Heritage Foundation economist Steve Moore said the agreement is a “big win for Trump” and free trade. Moore said the deal includes lifting restrictions on US soybeans, wheat, cotton, and manufactured items. He also said the threat of auto tariffs was an effective tool to force the Europeans to back down on their trade restrictions.

Moore said Trump had told him personally he was “not a protectionist,” and said he understands that Trump wants fairness in world trade. The economist compared Trump’s negotiating tactics to President Reagan’s negotiations with Soviet President Mikhail Gorbachev over nuclear weapons. Saying the President caught Europe off guard by suggesting all countries – including the US – have zero tariffs, Moore praised the President and predicted a future new trade deal with Mexico in order to isolate China and push the Chinese towards fairer trade practices.