REDTEA NEWS
Coronavirus Bringing Out the Totalitarian in Everyone
In Times of Crisis, Standing on Principle Is...
Just How Large Will the Federal Reserve Grow...
Whether Climate Change or Coronavirus, Central Planning Is...
Have Certificate of Need Laws Hampered the Coronavirus...
Never Let a Good Crisis Go to Waste
We’re All Equal, But Some Are More Equal...
When It Comes to Monetary Policy, It’s Deja...
Not Even the Nazis Were as Bad as...
Why the Federal Government’s Response to the Coronavirus...
Home America Now The Reality of the One-Party State: There’s Not Much Difference Between Republicans and Democrats
America Now 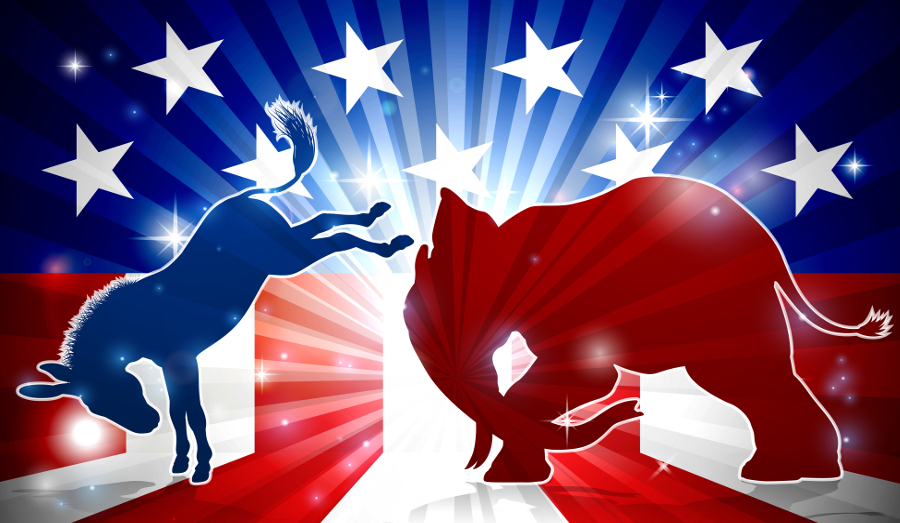 The passing of former President George H.W. Bush has captured headlines in recent days as the mainstream media looks back nostalgically on his time in office. One of the stories that has been circulating is that of the “unlikely” friendship between Bush and his successor, Bill Clinton. It’s only an unlikely friendship to those who believe that the political labels of Republican and Democrat actually signify a difference of opinion. Dig deeper under the hood and you’ll find that there really isn’t much difference between establishment Republicans and Democrats. And that’s why our country is in such bad shape.

Bill Clinton and George H.W. Bush didn’t differ significantly on policy issues. They were both globalist interventionists in matters of foreign policy, with Bush invading Iraq and Panama and Clinton maintaining the US no-fly zones in Iraq while going on to bomb Serbia. They both supported gun control, with Bush banning the importation of semi-automatic “assault weapons” within the first two months of taking office and Clinton signing into law the 1994 “assault weapons ban.” And neither one of them supported rolling back the size or scope of the federal government.

So much of the strife between Democrats and Republicans is a pure invention on the part of the media, created to sow political division and keep Americans at each others’ throats rather than attacking the political establishment that has them all hoodwinked. Political contests are a facade to fool the gullible, which is why you’ll see the Bushes, Clintons, and Obamas all hobnobbing together at the same public events. They’re not really opponents, they’re all part of the same elite establishment class.

There isn’t a dime’s worth of difference between the Republican and Democratic establishments on fundamental principles, the only disagreement is over marginal issues and who should be in control of the purse strings. One party may want to increase defense spending by 5% and cut welfare spending by 2% and the other may want to increase welfare spending by 5% and cut defense spending by 2%, but all that means at the end of the day is that the government is still wasting hundreds of billions of taxpayer dollars. Both parties want to take more of your money, distribute it to as many people as possible in order to buy votes, and keep growing the size and power of the federal government.