REDTEA NEWS
Progressive Democrats Hate Women
Rand Paul to Seek DOJ Criminal Referral for...
Maskless Democrat Who Caught COVID Wants Mask Mandate
Nancy Pelosi’s Bishop Gives Her a Smackdown
Was Whitmer Kidnapping Plot an FBI Creation?
Are US Cities Returning to the Days of...
Is the Government Reading Your Text Messages?
Over Half of White Liberal Women Have Mental...
Is the FBI the New Stasi?
New COVID Variants: Much Ado About Nothing?
Home America Now Senate Votes Against Rand Paul’s Objection To Waiving Spending Caps
America Now 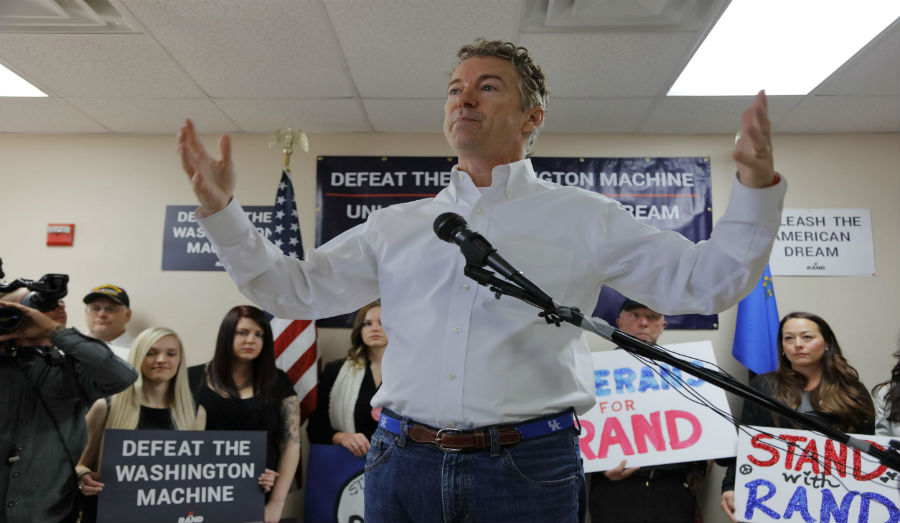 Congress successfully passed a continuing resolution right before Christmas to keep the government funded until it engages in a budget battle to pass an official spending plan for 2018. As a veteran of end-of-the-year fear tactics where both sides of the aisle threaten to shut down the government if the other side votes to cut their favored programs, Senator Rand Paul (R-KY) knew that a continuing resolution was on the horizon. Not one to let Congress pass something irresponsible without putting a spotlight on lawmakers for voters to see how much their representatives care about the national debt, Paul warned he would make lawmakers vote on “PayGo.”

The Senate had predictably decided to waive the PayGo requirement it had previously imposed on itself in 2010 to automatically cut certain programs such as Medicare in order to pass the continuing resolution, but not before Paul raised an objection to the waiver. Paul introduced a point of order to oppose waiving the budget caps and adding to the deficit, which required the vote of 60 senators. But while the Republicans currently hold 51 Senate seats, only 7 senators voted with him in a 91-8 vote.

In making the objection, Paul said, “If you care about the debt, vote for this point of order.” Before the vote last Thursday, he tweeted “Calling all conservatives, libertarians, and anyone who believes in limited government: call your legislatures and say don’t exceed the budget caps.”

But the thought of cutting Medicare was too much for some establishment Republicans to handle ahead of 2018. Only two true conservatives, Mike Lee (R-UT) and Paul voted “no” on the CR. Other “no” votes were from Democrats disgruntled that a debate on DACA had been pushed into 2018. “We have rules in place. The rules in place say that there are budget caps. So, they’ve got a special little waiver they’ve put in the spending bill because we are now going to exceed those caps,” Paul said, hammering both sides of the aisle on the Senate floor.

Paul had warned leadership that if they were “unwilling to compromise with somebody who is concerned about the debt, then they deserve to lose.” While leadership did win on passing a fiscally irresponsible CR, their establishment candidates will surely not see any benefit to their complacency with the $20 trillion debt come November 2018.