REDTEA NEWS
Tank Gift to Ukraine Exposes the Sad Reality...
The Government Thinks We’re the Terrorists Now
FBI Admits It Uses CIA and NSA to...
The Medical Industry Continues to Fail Patients
Democrats Are About to Learn That Turnabout Is...
If You Like Your Gas Stove, You Can...
McCarthy’s Woes Are Payback a Long Time Coming
The Response to the Twitter Files Is Telling
Are San Francisco’s Killer Robots the Wave of...
The Genocidal Tendencies of Climate Change Crazies
Home America Now Venezuela’s New Dictator Purges His Own Military, Expels US Diplomat
America Now 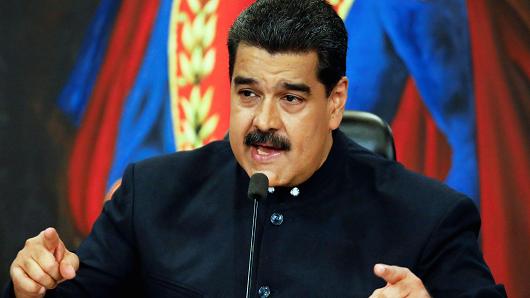 Nicolas Maduro, the newly “elected” ruler of Venezuela, wasted no time in purging the country of anyone he feels he needs to expel for “plotting against his regime.” According to the Miami Herald, turnout was embarrassingly low in the latest election. To counter the widespread discontent with the leftist regime, Maduro began preemptive arrests of armed forces officers suspected of treason. He then went after top US diplomats in Caracas, expelling them and accusing them of being linked to the “plot” of the officers to overthrow him.

Foro Penal, a human rights organization, was the first to report that Maduro had 11 Navy and Air Force officers detained before expelling the two US diplomats. The United States had issued a new round of sanctions after the election in Venezuela was condemned for being undemocratic, with turnout exaggerated. The Miami Herald noted that exit polls reported the true number of voters who cast ballots – many under threat of blackmail – was “3.6 million, or about 18 percent.” Meanwhile, the regime had claimed 46 percent ,or 20.5 million registered voters, participated.

In response to Maduro’s actions, US Vice President Mike Pence warned the Venezuelan regime that the US would take “swift” action and “continue to pressure” his government “until democracy is restored.” Secretary of State Mike Pompeo stated that the US may expel the top Venezuelan diplomat in addition to keeping sanctions in place.

A US citizen from Utah, Josh Holt, and his wife were just released on May 26 after being wrongfully incarcerated in Venezuela since 2016. Utah Senator Orrin Hatch had been working with Senator Bob Corker’s staff, as well as with Pompeo, to communicate with Maduro and secure Holt’s release. Hatch attributed the success to the willingness on the part of people “from different worlds, agreeing to a conversation.”

But the White House stated that its policy toward Venezuela has not changed, while in fact the US has ramped up pressure on the failed state. The White House also demanded the release of all political prisoners, including five American Citgo executives who have been imprisoned since last November. There are over 360 political prisoners in Venezuela’s prisons, according to Foro Penal.

Sadly, Maduro seems unwilling to change the policies of the socialist dictatorship. He has already ordered his security forces to impose price controls on food markets, and many analysts believe he will continue his dissent-purging campaign of arresting soldiers and will eventually eliminate direct elections. Time will tell if Maduro will put his country on the same path as Cuba, or if he will finally heed the advice of the United States and end the oppression of his people for good.