REDTEA NEWS
Why Is the Military Facing Recruitment Problems?
Has Zelensky Gone a Step Too Far?
As Gas Prices Remain High, US Sells Oil...
Fauci Thinks Lockdowns Should Have Been Stricter
Good Guy Takes Down Bad Guy, MSM Goes...
DC Homeless Shelters Filling Up With Illegal Immigrants
Inflation Still Rising: Are You Feeling the Pinch?
Japan, Abe, and Gun Control
Don’t Interrupt Your Enemy When He’s Making a...
Democrats Don’t Care How Much You Suffer
Home Money Is The Big Market Crash Upon Us?
Money

There’s nothing rational about the stock market; if markets were rational the financial entertainment industry would be out of business almost overnight. The fact is markets are wildly irrational because they’re composed of human beings. Individually people are smart, reasonable and act in their own self interest. In large groups people become fearful, panicky and irrationally self-destructive and markets reflect the identity of the herd, not the individual.

You don’t have to be an economist to recognize the market is due for a correction, some people think it’s already started, but that’s been true for most of 2014 and still no death drop. The apparent irrationality of the market seems scary and mysterious, until you look at the bigger picture historically. This interactive chart put out by Morningstar shows the fair value ratio of a basket of shares going back to 2001.

If you click on the Max tab you can see clearly that what we’re seeing today is neither the most overvalued market we’ve seen in the last 15 years nor the longest period of irrationally high values which took place from 2003 to 2008. Yet the markets feel overvalued today and, on the 1 year scale, fair market value is inching toward the 52 week high. Anywhere over 1.0 is in the danger zone and we’re currently sitting at 1.03.

A 20% Correction Is Not Out Of The Picture

As you can also see in the chart, when the market corrects, it really dives. That’s the herd mentality at work; when the stampede starts, everyone heads for the exits and a blood bath ensues. While dives are explained by psychology, it takes high speed computers to really get the crash rolling downhill. Big investors protect their margins with high speed computers that sell their holdings at the slightest whiff of a downturn. The intent is to minimize losses in down markets.

The Math of Loss

If the market corrects 20%, every $100 you have invested is suddenly worth $80. The real perverse aspect to losses in the stock market is that a 20% gain will not make your investment whole! $80 x 20% = $16 and $80 + $16 = $96, not $100. If the market drops 20%, it has to gain back 25% for you to get back to that original $100. Now you understand why big traders use computerized trading to minimize any losses. Using their high speed computers, they can buy back into the market just as easily once the selling is over. It’s another way Wall Street picks the pockets of people like you and I who may not have high speed trading protecting the value of our portfolio. Adding a small transaction fee to stock trades, which you and I would hardly notice, would add up to a major expense for Wall Street. That’s why big investment houses call our bought-and-paid-for legislators and holler like a two year old any time the idea comes up.

Market Is a Powder Keg

Even though the market is not terribly overvalued by historical standards, it’s still volatile right now. Conflicts in Libya and Iraq could result in a shock to world oil supplies. The first ISIS rocket propelled grenade that slams into Iraq’s southern oil fields could just as easily blow up world oil prices and precipitate a sell off in the market. If that event was followed by a gulf hurricane that impacted our oil refining capacity along the Texas coast and took it offline for several days, we could be looking at $6 or $8 a gallon gasoline, coupled with spot supply shortages, almost overnight. With the right combination of external events a 20% correction in the market could turn into 30% or 40% of panic induced devastation.

While a combination of events that drastic is unlikely, it’s wise to consider the possibility. I would not be investing big money in the market right now unless you’re sure you won’t need it for five or ten years. I’m leaving my money in the market precisely because we don’t need it in the next five years, but I’ve shifted from an emphasis on growth stocks to income. If the market does correct and the fair value ratio drops below 0.90, then I’ll shift back to growth. The reason I’m not taking any money out of the market is because it can remain overbought for a long period of time, like it did prior to 2008.

Until the big dip it’s prudent to be cautious. You and I don’t have the advantages of big trading houses, so it pays to be a little bit fearful and patient sometimes. 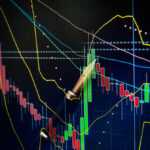 Risk — Should You Embrace it or Avoid it when You Invest?