REDTEA NEWS
Catholic Pro-Life Speaker the Latest Victim of DOJ...
New York Doesn’t Want Good Guys to Stop...
Top FBI Agent Forced Out After Allegations of...
Who Is the Real Threat to Democracy?
A Dozen Federal Agencies Behind the Online Censorship...
Government Is Behind Much of the Social Media...
Hunter Biden’s Laptop Repairman Alleges FBI Tried to...
Can You Trust the FBI Not to Steal...
Is General Milley Guilty of Insubordination?
Raid on Trump’s Home Highlights the Dangers of...
Home Money The Genius Of Paying Cash
Money

It’s interesting to watch the investment world because, over time, you start to notice that it has fashion trends, just like the clothing industry. Hemlines go up, hemlines go down, you should invest in ETFs this year and mutual funds the next. In Wall Street-speak people talk about what the “smart money” is doing. The smart money is in annuities one month, the smart money stays away from annuities the next. After you watch financial trends for a while you realize that the smart money is pretty fickle and changes its mind a lot.

What’s less fashionable and always a surprise is when someone slips up and lets some advice that runs counter to conventional wisdom slip through. Recently I was surprised to see a piece about paying cash being labeled as genius. That genius idea has been around basically forever but it doesn’t crop up in financial writing very often because the only people it benefits are consumers.

One of the greatest financial frauds ever perpetrated on a culture is the idea that, in the modern world, you can’t really get by without credit. Collectively we finance everything from the houses we live in to the cars we drive to the latte we sip on the way to work. The average person spends more time thinking about his or her credit score than they do about retirement.

You being in endless debt is fine with big business and Wall Street. The interest you pay on those loans is like a stealth tax built into your life. Except instead of getting back good schools, roads and a strong military, it goes straight into the pockets of bankers. Debt inflates the cost of everything you finance.

Let’s take the simple example of buying a car. Let’s say you’re car shopping and you find a decent used car for which you’re going to finance $20,000 of the purchase price at 5% for five years. Instead of $20,000, you’d end up paying $22,645.38 for the exact same car! That’s a price that’s actually 13 percent higher than the sticker. During that five years you’re essentially paying the finance company to drive their car. If something bad happens, it’s your responsibility. If you can’t make payments, the finance company can take the car back and then sue you for the money it cost them to reclaim the car. What a deal!

Now apply that same model to everything in your life including your house, the furniture in the house, your education and the clothes you wear. It all adds up to staggering amount of debt that keeps people trapped in jobs they hate and paying too much for things that will be long past their utility by the time they’ve made that last payment. We accumulate so much debt for things we can’t track that we have debt piled on debt. There’s even a term for that, it’s called “revolving debt” because the cycle just goes around and around.

The Genius of Paying Cash

Imagine if you and I are talking and I casually mention that I could give you a 10% raise by simply changing your habits. Would that sound like a good deal? You might be tempted to think, justifiably, that I was some kind of financial genius. That’s the genius behind programs like Dave Ramsey’s envelope system. The idea is that you learn the pain of parting with cash instead of masking that pain by using plastic.

If you really don’t want to have that much cash laying around in envelopes, which can be a bad idea for a lot of reasons, you can do the same thing with a spreadsheet. Instead of envelopes, use the spreadsheet to create buckets for different expenses and you allot the electronic blips in your bank account to those buckets. This method is a little safer than keeping cash around but it also requires that you deduct your spending from your blip buckets every day. This method is possible today because it’s so easy to check your balance online. Basically what you’re doing is balancing your accounts every day.

By doing that faithfully you’ll learn the same lesson as handling cash, just without the envelopes. You’ll be able to see how debt impacts your disposable income and how much of your money is slipping through the economic cracks. 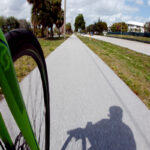