REDTEA NEWS
Was Fauci Fibbing About His Financials?
Political Commissars Are Here And Are Starting Their...
Mormons Pointing to Higher Actual Inflation
Top Scientists Feared COVID Came From Lab All...
Quebec to Start Fining the Unvaccinated
McCarthy Threatens to Strip Democrats of Seats If...
Supreme Court Shows Its Schizophrenia
Beset by Crime Wave, LA Residents Flock to...
The Case of Jan. 6 Gets Curiouser and...
Twitter Continues Censorship Rampage, Bans MTG
Home News Dear Jeff Sessions, Marijuana is Not a Gateway Drug
News 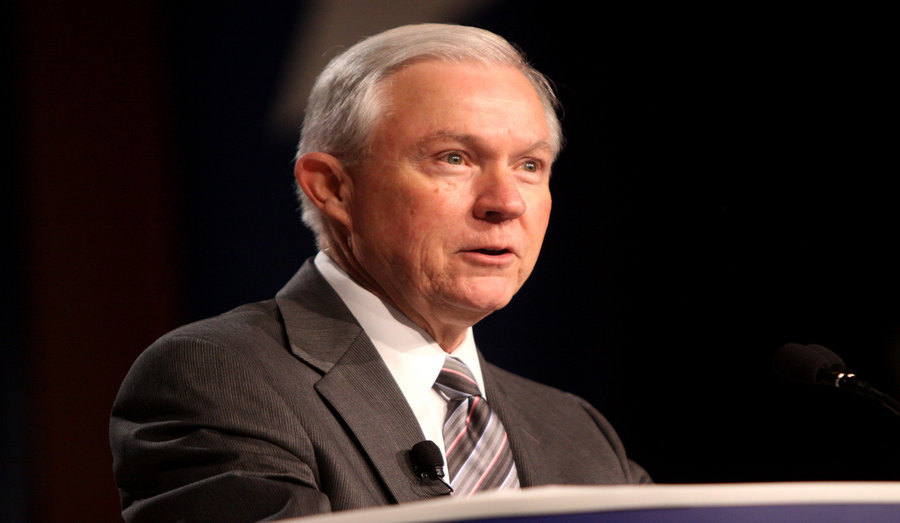 And even if it was, throwing people into prison is not the solution. Attorney General Jeff Sessions is trying to bring back the 1980s “marijuana is a gateway drug” theory. He says that hard drug use and addiction often times begins with marijuana. Sessions also continues to make pro-Drug War arguments and cite statistics that are highly suspect and debatable.

Back in 2016, Sessions had this to say about President Obama, the War on Drugs, and people who smoke marijuana: “I think one of Obama’s great failures, it’s obvious to me, is his lax treatment in comments on marijuana. … It reverses 20 years of hostility to drugs that began really when Nancy Reagan started ‘Just Say No.’ ” Sessions finished by saying that “this drug is dangerous, you cannot play with it, it is not funny, it’s not something to laugh about . . . and we need to send the message with clarity that good people don’t smoke marijuana.”

Now, Obama did do terrible things, but leaving marijuana policy to up to the states was not one of them. Obama didn’t end the War on Drugs and he wasn’t lax on drugs either. All he really did was enact states’ rights, and in this way Obama was more of a constitutionalist than Jeff Sessions. It should be easy to see how 50 states competing with varying drug policies with different outcomes would result in better incentives for success than a one-size-fits-all policy would.

The idea behind the gateway theory of drugs is that the use of a drug, in this instance marijuana, results in an increased likelihood of using more serious drugs such as cocaine or heroin. This idea has been the main driver behind the prohibition of marijuana for the last 40 years, despite the fact that marijuana has never been proven to have a “gateway effect”. Sessions echoed this in late 2017 when he said “I do think this whole country needs to not be so lackadaisical about drugs. Much of the addiction starts with marijuana.”

Facts Don’t Care About Your Feelings

The “Marijuana is a Gateway Drug” theory is easy to debunk and it starts with this: marijuana is the most used illegal drug in the world. If the gateway theory were true we should see far more users of other harder and illegal drugs, yet we don’t. The reality is the vast majority of marijuana users do not go on to use other illegal drugs.

The gateway theory is an example of trying to use correlation to argue causation. Correlation does not equal causation. In a letter to the NY State Legislature, the Drug Policy Alliance explained it excellently: “We know that some people are more willing to try drugs than others, and people who are willing to try drugs are more likely to have used multiple drugs in their lifetime than people who don’t use drugs at all. Because marijuana is the most widely available and most widely used illicit substance in the world, someone who has used less available and less popular drugs (cocaine, heroin, etc.) in their lifetime is more likely to have also used marijuana than someone who has not used any of these substances. Among people who have tried a range of drugs, they are likely to have used marijuana before they had the means or opportunity to try any other illicit substance, because marijuana is the most easily-obtainable of the group.”

Put simply, those who have used other drugs are more likely to have also used marijuana. The reverse is not true. Most who have used marijuana have not gone on to do other drugs. In fact, it has been well known in the scientific community for two decades that most drug users begin with alcohol and nicotine before marijuana, and usually before being of legal age. And when considering that marijuana cannot kill you through ingestion, while alcohol and tobacco are much more physically addictive and kill more people than all illegal drugs combined, the whole War on Drugs mentality appears nonsensical.

In the United States Today

If marijuana use did in fact lead to more opioid abuse, as Sessions claims, then we should expect to see that in the states that have legalized marijuana. Several studies have found the opposite. An article by C.J. Ciaramella at Reason lists them:

The good thing, though, is that Jeff Session’s message is falling on mostly deaf ears. Most political groups in America – libertarians, classical liberals, progressives, some conservatives, and most young Republicans (63%!) favor legalization of marijuana.

Those of us who want different ways of addressing drug problems aren’t lackadaisical or pro-drug use as Sessions makes it seem. Instead, we believe that prohibition and throwing people into decades-long rape cages (prisons) is not the right way of treating drug abuse and addiction. Prohibition has never worked and it never will, the last 40 years shows that, as did the failure of alcohol prohibition in the 1920s.

There are far more efficient, effective, and humane ways of dealing with drug problems. It begins with seeing the drug problem as a human issue, a social issue, and a health issue, and not a criminal issue.