REDTEA NEWS
Tank Gift to Ukraine Exposes the Sad Reality...
The Government Thinks We’re the Terrorists Now
FBI Admits It Uses CIA and NSA to...
The Medical Industry Continues to Fail Patients
Democrats Are About to Learn That Turnabout Is...
If You Like Your Gas Stove, You Can...
McCarthy’s Woes Are Payback a Long Time Coming
The Genocidal Tendencies of Climate Change Crazies
The Response to the Twitter Files Is Telling
Are San Francisco’s Killer Robots the Wave of...
Home Breaking News McCain Damaged in Collision with Merchant Ship; 10 Sailors Missing
Breaking NewsNews 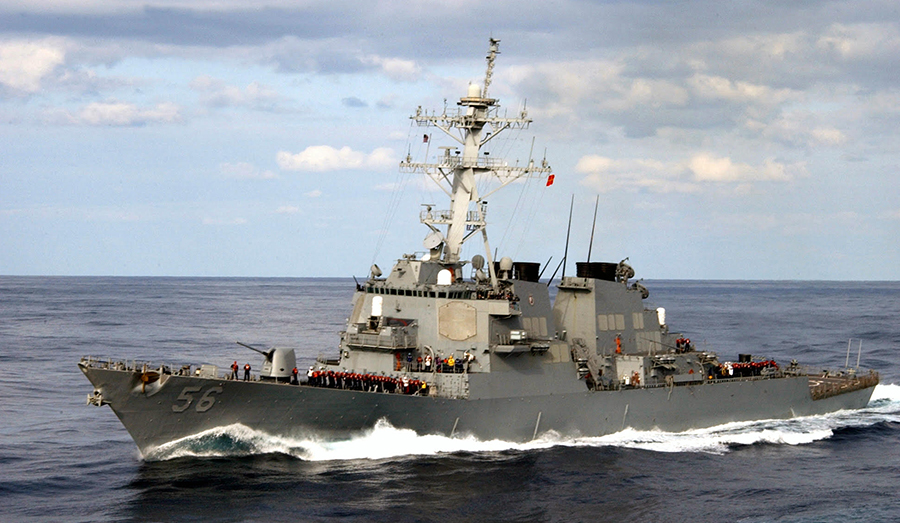 The Arleigh Burke-class guided missile destroyer USS John S. McCain (DDG-56) was damaged after a collision with the Liberian-flagged oil tanker Alnic MC early Monday morning. The McCain suffered significant hull damage to the left rear of the hull, resulting in flooding of berths and damage to communications facilities. Four injured sailors were airlifted to medical facilities in Singapore, while 10 sailors remain missing.

The McCain was on its way to a routine port call in Singapore when the incident occurred. The collision took place near the Straits of Malacca, a narrow passage that provides the primary shipping corridor between the Indian Ocean and the Pacific Ocean. More than 25% of the world’s ship traffic passes through those straits, resulting in very heavy maritime traffic and a high chance of collisions.

This is the second time in two months that a US Navy destroyer has sustained major damage in a collision with a merchant vessel, and the fourth accident this year involving US Navy ships. Given the fact that 10 sailors remain missing, it is highly likely that this latest incident will result in fatalities. The McCain is now in port in Singapore undergoing inspection.

The Navy just recently issued preliminary findings on the previous destroyer collision between the USS Fitzgerald and the ACX Crystal last month which resulted in the loss of seven sailors’ lives. The Fitzgerald’s commander and several of its officers were relieved of their duties after the initial investigation found evidence of poor seamanship and flawed teamwork on the part of those standing watch. This latest incident will undoubtedly lead to more questions about the training of officers and sailors, the quality of seamanship within the Navy, and the conduct of naval ships when in close proximity to merchant vessels.