REDTEA NEWS
Will Monkeypox Be the Next Big Health Scare?
Are Democrats Going to Push Price Controls?
NIH Royalty Payments Bring Up Conflict of Interest...
The COVID Narrative Is Changing Before Our Very...
Dishonesty Is the Left’s Stock-In-Trade
FBI Whistleblowers Coming Out of the Woodwork
Are You in a Government Database? Probably So
Leftist Tolerance on Display in Wake of Roe...
China Demands Censorship of US Landmarks in Movies
Biden Administration Clueless About Border Fiasco
Home News New DHS Secretary Visits Border Wall, Calls For Congress To Fund Border Security
News 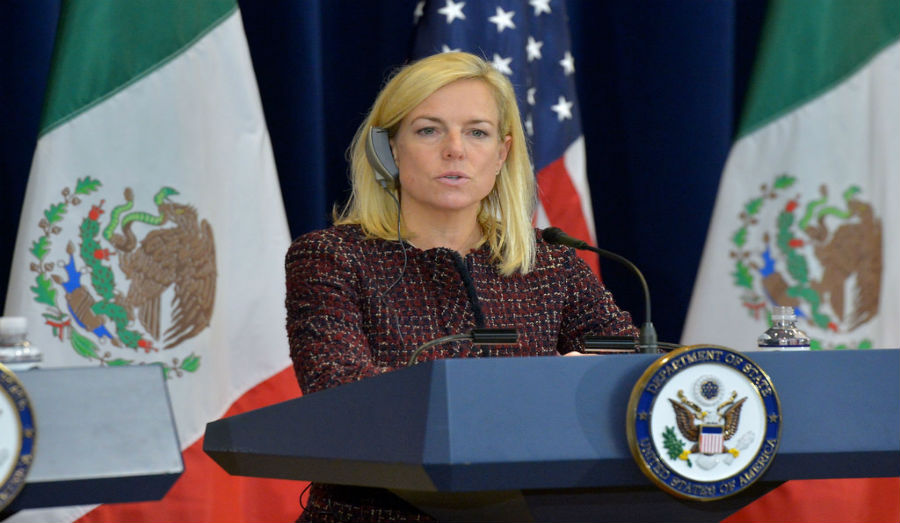 In her first week on the job as Homeland Security Secretary, Kirstjen Nielsen made a trip to America’s southern border in a show of solidarity with President Trump’s call to build a wall and with Border Patrol agents who she wants to empower with greater detection technology. Speaking to Fox News reporter Brian Kilmeade as they toured sections of the physical barrier, Nielsen said she needs Congress to approve funding for developments in weaker areas.

Immigration officials have been outspoken in their praise of the President’s support for their programs and protocols that have led to the lowest level of border crossings in 45 years. Trump said at Nielsen’s swearing-in ceremony that he’s confident she will “take it to new levels.”

To do so, Nielsen called for patching up the physical barrier, along with funding for a “system of systems,” that includes more cameras and sensors and increased personnel. Nielsen pointed out that while illegal immigration is a problem, greater security threats arise from criminal organizations, drug traffickers, human smugglers, and terrorists who monitor weaknesses in the border.

During her trip, she also visited with Texas law enforcement officers in Austin, Texas where she praised them for cooperating with federal authorities in removing suspected illegal immigrants. In speaking of the importance of working with federal officials, she told Austin law enforcement leaders “We would like to find a way to work with you.” She added, “I know we’re all committed to doing that. We’re all committed to making our communities safe, so we have to find the best way to do that.”

Nielsen was also critical of authorities outside of Austin who thwart the efforts of federal officials to protect American citizens with “sanctuary communities.” According to Nielsen, seven Texas counties agreed to assist ICE in the removal of suspected jailed illegals and others agreed to help with immigration enforcement. In addition, 60 law enforcement agencies in 18 other states have signed onto similar agreements with DHS in 2017.

Since the attempted suicide bomb attack in New York City earlier in December, Nielsen has also joined Attorney General Jeff Sessions and President Trump in calling for a merit-based immigration system. Nielsen said, “These savage criminals in our communities in America are a deadly consequence of our open borders and failed immigration policies.”