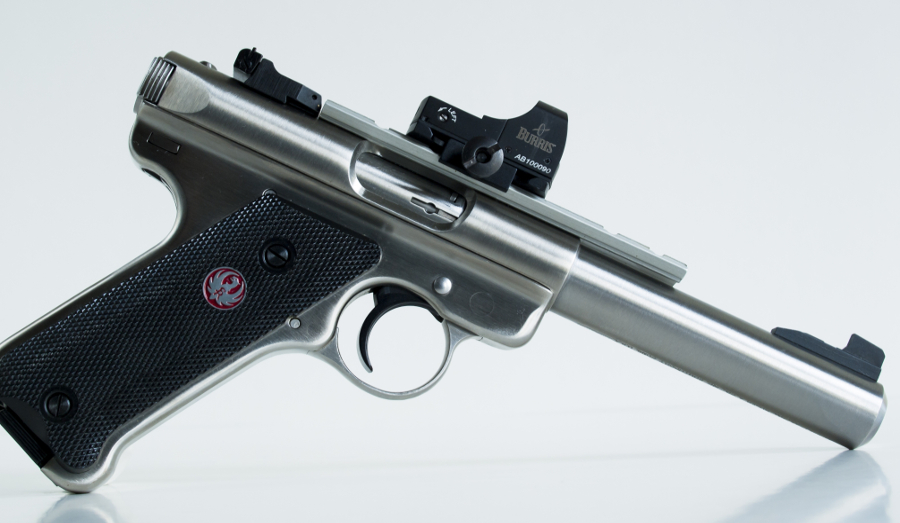 We’ve previously covered .22 rifles, but what about .22 pistols? They may not be as accurate as a rifle, but they can be very handy to carry around if all you need is a compact firearm to shoot small game, defend against snakes, or just have fun in the woods. And a .22 pistol is much easier for a woman, child, or beginning shooter to handle than a full-sized service pistol.

By far the most popular series of .22 pistols in history are the Ruger Standard, including the later versions known as the Mark II, Mark III, and Mark IV. Bearing a slight external resemblance to the German Luger pistol, the Ruger Standard is actually closer in operation to the Japanese Nambu pistol. Chambered in .22LR and featuring a 10-round magazine, the Ruger .22 pistols have been in production since 1949. The Standard and Mark I pistols were produced until 1981, the Mark II pistols from 1982 to 2005, and the Mark III pistols from 2005 to 2016.

The latest iteration of the pistol is the Ruger Mark IV pistol, which features a greatly simplified method of field stripping, making the pistol far easier to clean. Variations on the pistol include the 22/45, which features a grip that mimics the angle of the 1911 pistol’s grip and features a thumb magazine release, allowing for easy carryover of shooting habits from those used to the 1911.

Advantages of the Ruger Standard .22 Pistols

The Ruger Standard and Mark series of pistols are relatively large for a .22 pistol, meaning that recoil is quite mild. And with the newer pistols coming standard with pre-drilled holes to install Weaver or Picatinny rails, it’s easy to install a red dot or reflex sight, making the job of aiming the pistol much easier.

With the .22 shortage long behind us, .22LR ammunition is getting back down to more reasonable levels. Expect to pay 2.5-3 cents per round of ammunition. That means you can shoot a heck of a lot of targets without breaking the bank.

As the most popular .22 pistol in history, accessories are everywhere. From new grips to

different sights, integrally suppressed barrels, etc., you can find just about anything you want to customize your Ruger .22 pistol.

It’s not uncommon to find the Ruger Mark IV for under $300. That’s a reasonable cost for a well-made pistol.

Disadvantages of the Ruger Standard .22 Pistols

The grip angle on the Standard and its successors is a little awkward, similar to that of the Nambu. Many people have compared the grip angle to that of the Glock, which some also find difficult to shoot. If you’re looking for a Ruger .22 pistol with a comfortable grip angle, consider the 22/45 versions.

The Ruger pistols through the Mark III have a reputation for being very difficult to field strip and clean. Given how dirty .22LR ammunition is, cleaning is a necessity. You may be able to get away with a few hundred rounds between cleanings, but eventually the carbon deposits from burnt powder gases will jam the action.