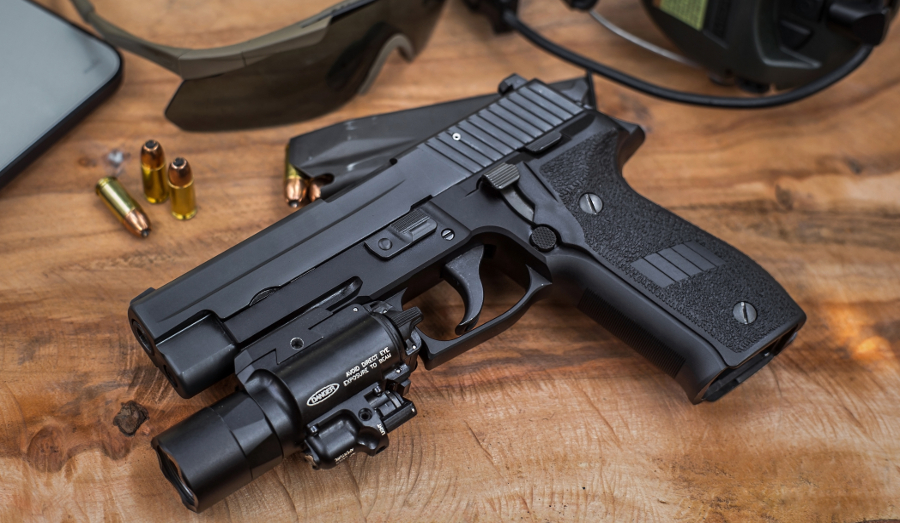 Some of the most popular pistols on the market today are built by SIG Sauer. The brand’s history is a little complicated, as the SIG brand is used by one company and SIG Sauer by two other companies, all of whom originally had the same parent company. So let’s start from the beginning.

Schweizerische Industrie Gesellschaft (Swiss Industrial Company, or SIG) is a Swiss company that has been in business since the 1850s. From 1860 to 2000 the company was heavily involved in the firearms industry, producing rifles and pistols for the Swiss armed forces and for the civilian market.

SIG Sauer came about in the mid-1970s when SIG purchased the renowned German firm J.P. Sauer & Sohn, the West German reboot of the famed J.P. Sauer company that had been seized by East German authorities. With the purchase of the West German Sauer, the SIG Sauer brand was born.

SIG already had a reputation for building quality pistols at the time it began its partnership with Sauer, as its P210 pistol, a refinement of the French Modele 1935A pistol, is still renowned for its high manufacturing quality and its accuracy. SIG Sauer built on the success of the P210 and developed the P220, which replaced the P210 in Swiss military service in 1975.

The P220 is still in production and is commonly encountered in the United States. While originally chambered in 9mm, it is also available in 10mm Auto and .45 ACP. Because of its single stack magazine, the P220 generally only holds 7 or 8 rounds, depending on caliber.

A higher-capacity version of the P220, the P226, was developed and entered into the US military handgun competition to replace the 1911 pistol. While the P226 lost out to the Beretta 92, it still became a popular pistol on the civilian market. With its 15-round capacity in 9mm, it was competitive with other modern 9mm pistols. The pistol is also available in .40 S&W and .357 SIG, while a double stack .45 ACP pistol is available as the P227.

SIG Sauer went on to produce a line of polymer-framed pistols based on its “legacy” P-series pistols. Culminating in the current P2022, the pistols are available in 9mm, .40 S&W, and .357 SIG. Hundreds of thousands have been produced for law enforcement agencies and governments around the world.

Finally, the SIG Sauer P320 is the latest development from SIG Sauer, featuring striker-fired pistols available in 9mm, .40 S&W, .357 SIG, and .45 ACP. A variant of the P320 won the US Army’s handgun competition to replace the M9 (Beretta 92), with the winning pistol designs to be designated the M17 and M18.

There’s no question that SIG Sauer pistols have a reputation for quality machining. Just looking at them you can see that there’s been a lot of work put into machining the metal and finishing it well. Some of the pistols are just so well-finished that you almost don’t want to get them dirty. While a lot of manufacturing is done now in the United States, and newer pistols are available with polymer frames, the reputation for quality of manufacture remains.

SIG Sauer has a reputation for reliability. While precisely machined firearms can often be finicky when feeding certain types of ammunition or when being exposed to less than ideal environmental conditions, SIG Sauer is an exception. In fact, the Ohio State Police fired 228,000 thousand rounds through 19 different pistols in a test to choose its new service pistol before picking the P226 as the most reliable.

The drawback to high build quality is that it comes at a cost. The legacy P220-series of pistols have an MSRP of $1,000 or more. Street price, if you’re lucky, is $750-800 at a minimum, and even used pistols maintain their value quite well. For the price of a brand new P220 or P226 you could purchase a new Glock and several thousand rounds of ammunition. For those for whom cost is a consideration, the legacy SIG Sauer pistols have priced themselves out of the market.

The P320-series of pistols is much cheaper, around $450-500 brand new, and so is competitive with Glock. But with Glock having over 30 years of a head start, it’s going to be an uphill battle for SIG Sauer to eat away at Glock’s market share.

The steel-framed SIG Sauer pistols are heavier than modern polymer-framed pistols. If you’re wearing a duty holster or going to war with these pistols you may not mind a few extra ounces of weight. But for those who intend to conceal carry, the heavier pistols may become uncomfortable after several hours of carry.

Many firearms companies today have resorted to widely expanding their handgun offerings, which can result in a huge number of variants that confuse the customer as to what exactly the difference between the pistols is. SIG Sauer’s naming system isn’t the most intuitive, even within the P22X-series. While the P225, P226, etc. derived from the P220, the P238 didn’t derive from the P230, while the P938 derives from the P238. Then there’s the polymer-framed SP2022 which derives from the P220, while subsequent polymer-framed handguns became the P320, the everyday carry version of which was then named the P365. Does that make sense?