REDTEA NEWS
Democrats Don’t Care How Much You Suffer
The Real Purpose of the Second Amendment
Why Gasoline Prices May Never Come Down
Are We in Civil War Already?
The Narrative Is So Transparent It’s Laughable
Another Pro-Life Pregnancy Center Firebombed
Attempt on Kavanaugh’s Life Shows the Danger the...
Inflation Causing Americans to Change Spending Habits
American Gun Owners Are the Last Line of...
Democrats Still Don’t Understand Guns or Gun Owners
Home Survival Survival Firearms Battery: The Winchester 1892 Rifle
Survival 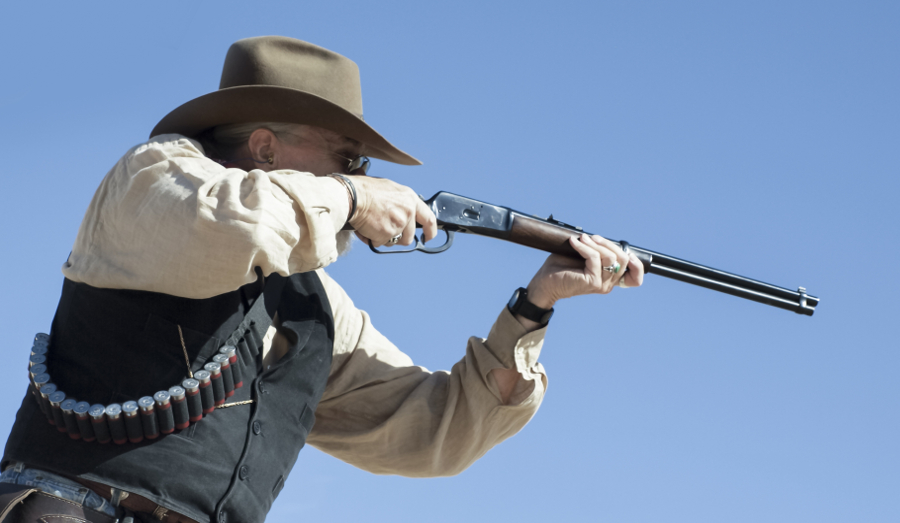 Think of a cowboy holding a rifle and you’ll inevitably conjure up an image of the Winchester 1892 rifle. Its widespread use in Hollywood movies during the heyday of the Western genre made it one of the most iconic symbols of the Wild West in the eyes of most Americans. The Winchester 1892 was so strongly associated with the Wild West that it even saw use in films and TV shows that were set well before 1892. Prominent examples of that include the Burt Lancaster film “Vera Cruz,” set in 1866, and the rifle’s most famous use in the iconic TV show “The Rifleman,” featuring Chuck Connors, set in the 1880s.

Over one million Winchester 1892s were produced during its initial production run from 1892 to the early 1940s. Spanish production of the “El Tigre” copy also took place during this period, with over one million rifles produced. Production of Winchester 1892 copies was begun again in the 1970s, and today you can find numerous examples from companies such as Chiappa, Rossi, and Browning. Brand names you may find include Rossi, Puma, and Navy Arms.

Modern Winchester 1892 copies feature much improved metallurgy, allowing them to be chambered for modern, high-pressure cartridges such as the .357 Magnum, .44 Magnum, heavy .45 Colt loads, and even the .454 Casull. Because of their appearance as “cowboy guns,” they don’t attract notice from those who want to ban guns and who think that because they look old-fashioned they’re not very dangerous. But lever-action rifles were the assault rifles of their day, able to fire far faster than the single-shot Springfield rifles in use by the US Army until the late 1890s.

Available in barrel lengths of 16, 20, and 24 inches, the various 1892 clones feature a tubular magazine underneath the barrel with a normal capacity of 8, 10, and 12 rounds respectively. 10-12 rounds of .44 Magnum or .454 Casull is nothing to sneeze at, and can just as easily be used to take elk or bear at short range as it can for self defense in an urban environment.

Advantages of the Winchester 1892 Rifle

The original cartridges for which the Winchester 1892 was chambered are, by today’s standards, anemic. But with modern high-quality steel the modern Winchester 1892 clones are able to use much more effective cartridges, allowing them to be effective hunting rifles. Chambered for hard-hitting cartridges such as .44 Magnum and .454 Casull, the Winchester 1892 clones can hold 8-12 cartridges in their magazines. The .44 Magnum can shoot 300-grain bullets at nearly 1,500 fps, while the .454 Casull is easily capable of matching the original .45-70 ballistics of a 400-grain bullet traveling at 1,300 fps, with some hotter commercial loads pushing those bullets to 1,600 fps. That makes these rifles effective at taking down big game.

Featuring a capacity of 8-12 rounds of hard-hitting ammunition, Winchester 1892 clones can hold plenty of ammunition. That’s particularly true for the larger calibers such as .44 Magnum, .45 Colt, .454 Casull, and .480 Ruger, which feature magazine capacities equal to big-bore AR-15 cartridges such as .458 SOCOM and .50 Beowulf, so the 1892 doesn’t give up much on that front. They’re also easily topped-up by single-loading rounds through the side feed gate when you have a chance to reload.

3. Flies Under the Radar

Because of their appearance, lever-action rifles don’t attract attention from anti-gunners, police, and thieves. A Puma 92 in .454 Casull and an AR-15 in .458 SOCOM have roughly the same ballistic performance and magazine capacity, but to someone ignorant about firearms the AR-15 comes across as far more dangerous, deadly, and in need of being banned. An 1892 is good insurance against future gun control laws.

Disadvantages of the Winchester 1892 Rifle

Because the Winchester 1892 was originally chambered for pistol cartridges that featured a slight bottleneck, modern straight-walled revolver cartridges don’t always feed well in 1892 clones. Feeding will often vary from rifle to rifle. While modification of the cartridge feed guides may aid in feeding, that should always be a last resort.

If you’re looking for an original Winchester 1892 rifle you’re going to have to pay up. Collector interest in them remains high so costs are high too. Expect prices to start around $1,000 depending on condition. And given their age and how you’d likely have to baby them, original rifles aren’t the best choice for a SHTF scenario. Aside from higher-quality steel, the newer guns are lower in cost, around $400-500 for used guns and $500-650 for brand new ones.

Because of the large number of companies that have copied the Winchester 1892, there’s no guarantee that parts will fit from one company’s rifle to another. If you purchase a Winchester 1892 clone, make sure you stock up on spare parts from the same manufacturer so that you’ll have parts available in case something breaks.