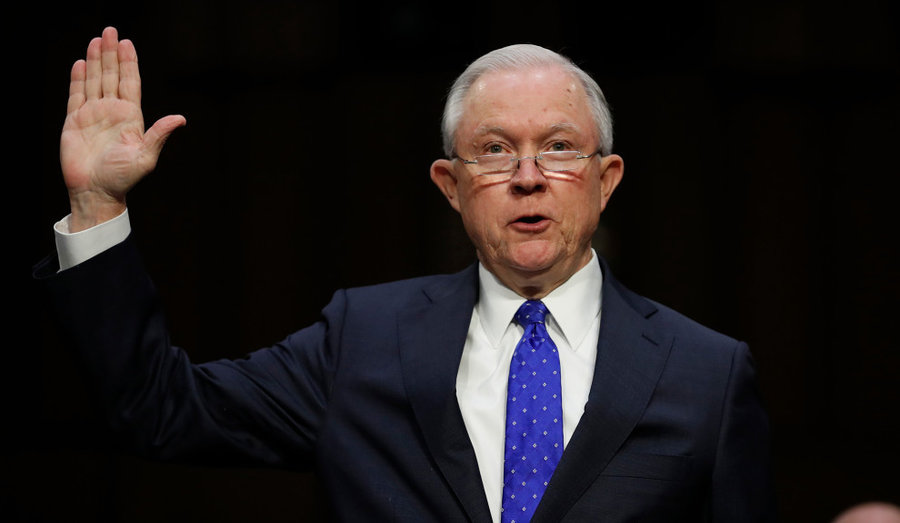 If the first year of the Trump presidency saw many of his supporters pumping their fists in joy at all the “winning” that was going on, this second year has many scratching their heads. The Trump of the campaign trail, the Trump who appointed Neil Gorsuch to the Supreme Court, the Trump who lowered taxes for millions of American families has suddenly been replaced by a crazy man who wants to take people’s guns away and ignore due process in doing so. And unfortunately, his Attorney General is only too happy to assist him in doing that.

Despite earning President Trump’s ire by recusing himself from the Russia investigation, Attorney General Sessions managed to remain one of the handful of senior administration officials who stuck around despite the President’s extreme displeasure. And now Sessions is at the forefront of the administration’s gun control attempts.

Over the weekend, the Justice Department published a notice that it proposes to issue a regulation that would ban bump stocks. In order to do so, DOJ would “clarify that the definition of ‘machinegun’ in the National Firearms Act and Gun Control Act includes bump stock type devices, and that federal law accordingly prohibits the possession, sale, or manufacture of such devices.”

Of course, federal law is pretty clear on what a machine gun is. According to 26 USC 5845, the “term ‘machinegun’ means any weapon which shoots, is designed to shoot, or can be readily restored to shoot, automatically more than one shot, without manual reloading, by a single function of the trigger.” Since bump stocks don’t change the ability of a gun to shoot more than one shot with a single function of the trigger, they aren’t classified as a machine gun, and rightfully so. How DOJ can attempt to square that circle is going to be interesting.

We will likely witness one of the most extraordinary feats of linguistic gymnastics that has ever been attempted, in order for DOJ to be able to classify a non-machine gun as a machine gun. And of course, any ruling with respect to bump stocks could have knock-on effects on other firearms accessories such as binary triggers, or even to whole classes of firearms themselves. The ramifications of such a hurried, slipshod, arbitrary regulation could be far-reaching.

This is nothing more than an attempt to satisfy a temporary whim by ignoring clear statutes and running roughshod over the rule of law. Had this been Obama’s DOJ attempting this, conservatives would have been up in arms at this dictatorial overreach and the monstrous precedent it sets by unilaterally redefining a crystal-clear statute through a mere regulation. But now that Sessions is doing it, the response has been all too muted, aside from some dissatisfaction among knowledgeable gun owners and firearms enthusiasts.

When Trump came into office, gun owners had high hopes that his presidency would mean passage of national concealed carry reciprocity and relaxation of restrictions on ownership of sound suppressors. The nationwide momentum was in favor of gun rights and greater understanding of the benefits of a well-armed populace. But in one year everything has done a complete 180.

Now President Trump has seemingly capitulated to the gun banners, handing them the momentum and encouraging them to fight harder to take more guns. Those who won’t stand up to this overreach, or who think that it’s okay because it is Trump doing it, will deserve everything they get when a future Democratic President uses this precedent against gun owners.