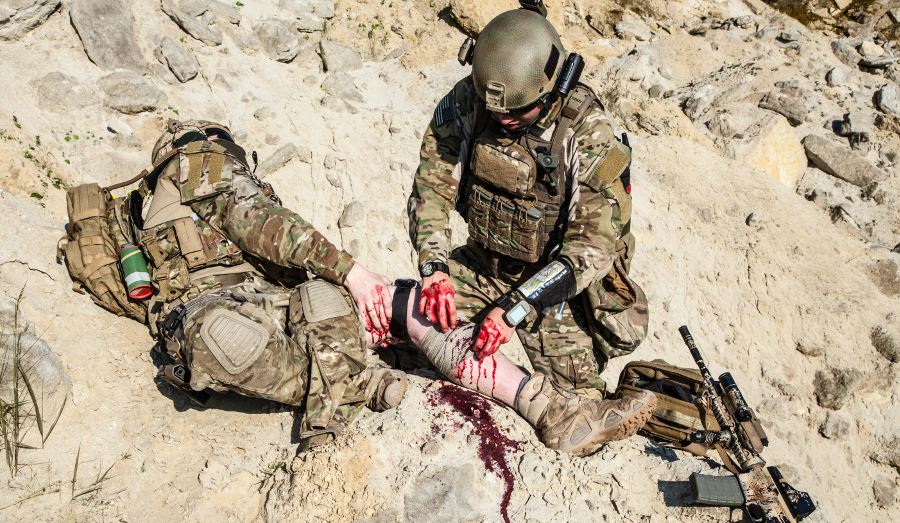 We previously covered the basic individual first aid kit (IFAK), or boo-boo kit, which covers most minor cuts, scrapes, and bruises. But all the band-aids in the world won’t help you if you’re suffering from a gunshot wound, broken ankle, or nearly severed limb. That requires much more effective first aid gear, as well as the training to put that gear into use.

Most trauma kits are geared towards treating victims of armed combat or gunshot wounds. The three leading causes of death in combat are blood loss, tension pneumothorax, and airway obstruction. Blood loss is pretty self-explanatory, and treatments against it can help victims of car crashes, major lacerations, etc.

Tension pneumothorax is the build-up of air within the pleural space, which can cause the lungs to collapse. It’s a life-threatening condition but one that’s largely confined to those suffering from a sucking chest wound caused by being shot through the chest or back.

Airway obstruction is another condition that can affect people who lose consciousness for a wide variety of reasons. Keeping an open airway can be vitally important to their survival.

Add to that the likelihood of broken bones or sprained muscles or ligaments and you pretty much have covered most of your bases for the most common conditions you’re likely to experience in a survival situation. The goal here is to treat victims and stabilize their condition so that they can be moved to a medical facility where they can gain more comprehensive care. With that in mind, here’s the gear that you’re going to need.

There are a wide variety of options here if you need to prevent rapid blood loss, and it’s pretty much up to individuals to carry what they feel most comfortable with. Hemostatic agents are designed to provide rapid blood coagulation in the event of severe blood loss. We’re not talking about a bad cut here, we’re talking about a severed artery that if not treated within a minute or two will lead to blood loss severe enough to kill someone.

Some of the most common names you’ll see for hemostatic agents are QuikClot, Celox, and Combat Gauze. They can exist as powders or as gauze impregnated with the hemostatic agent. Many who have used these products state that in the event of major blood loss the flow of blood can be so strong that the powders are just washed away by the blood.

In that case, the impregnated gauze comes in handy. The wound should be packed with as much gauze as necessary to stop the bleeding. Yes, packing gauze into a bloody wound can lead to infection, but it’s better to battle an infection that can respond to antibiotics than it is to bleed to death from a fixable wound.

Tourniquets are another way of stopping blood loss. They are generally used when an artery has been severed in the arm or leg. The tourniquet is placed as high around the arm or leg as possible and then is tightened with the windlass until blood flow stops. The time the tourniquet was applied must be noted, as keeping a tourniquet in place for more than two hours can lead to nerve damage or limb loss. Still, it’s better to lose a limb than to lose your life.

Chest seals are used to treat sucking chest wounds and prevent the buildup of a tension pneumothorax. They are generally sold in pairs, as the most common chest wounds feature a rifle bullet entering the chest and exiting the back, or vice versa. In that case, both the entry and exit wounds need a chest seal. The most popular chest seals are vented chest seals, which allow pressure buildup within the pleural space to dissipate. Unvented chest seals, by contrast, still allow improvements in breathing but will eventually lead to the development of tension pneumothorax.

A nasopharyngeal airway, or NPA, is a tube that is designed to be inserted into the nose to create an airway in the event of an obstructed airway. When someone falls unconscious the jaw muscles can relax, causing the tongue to slide backward and obstruct the airway. That may not always be readily apparent to those treating the person, nor is it always easily remedied through methods such as head tilting and chin lifting.

The NPA features one flared end that is designed to keep the NPA from slipping all the way into the nose. The other end should be lubricated in order to ease insertion of the NPA, and should be inserted into the right nostril. If it doesn’t fit, try the other nostril. Don’t force insertion as that can result in nasal bleeding, which is not something you want to have occur to an unconscious person.

If you’re in the middle of the woods and you or a member of your party suffer a broken bone or severe sprain, splinting the limb or extremity can be necessary to keep the affected body part immobile so that no further damage is done.

Get the Right First Aid Training

Remember that all the gear in the world won’t help you if you don’t know how to use it. You can find basic first aid courses through the American Red Cross or Stop the Bleed. More advanced courses such as wilderness first aid and trauma first aid can be found through other organizations, or through local community colleges. Make sure that you know how to use the gear you have so that you’ll be a help and not a hindrance in an emergency situation.

The Many Health Benefits of Drinking Lime or Lemon Water